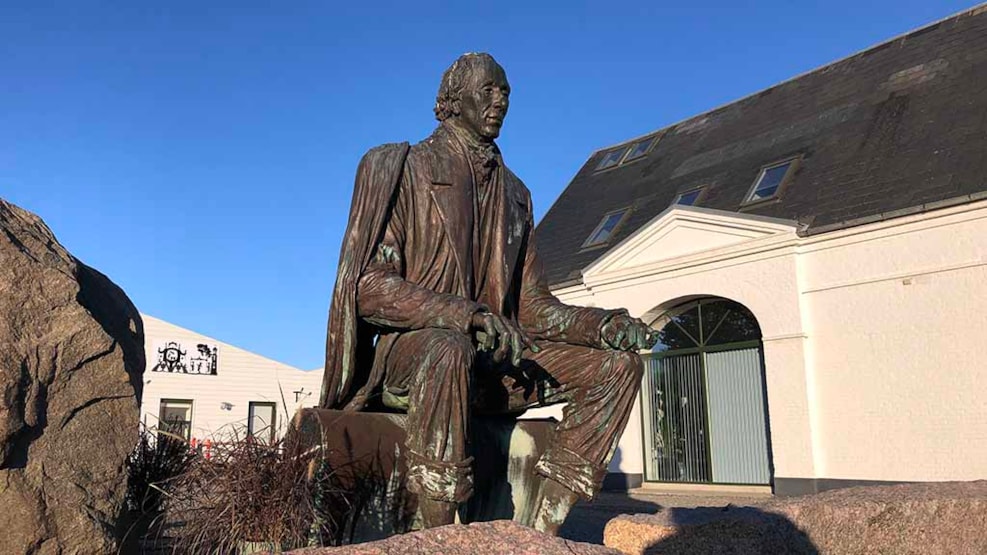 At Bogense's old harbour you can meet Denmark's best storyteller Hans  Christian Andersen in the form of a beautiful sculpture by the artist Jens Galschiøt - and it's perfectly true!

The figure of Hans Christian Andersen is enjoying the view of Bogense Harbour and the small square with a satisfied little smile on his face, and he deserves that, because he has been through so much.

The figure was created by the artist Jens Galschiøt for a large water sculpture “The Storyteller's Well”, where Hans Christian Andersen was supposed to sit on a bench with his feet in water surrounded by 500 of his fairy tale characters. The sculpture initially received lots of grants on the occasion of the poet's 200th anniversary in 2005, and the figure of Andersen was placed on the Flakhaven area in Odense in front of the Town Hall. But now the story takes an ugly turn! Odense Municipality could not find a suitable place to place the “The Storyteller's Well”, and with the financial crisis all financial support for the project disappeared.

Therefore, the sculpture of Hans Christian Andersen stood by itself for several years at Flakhaven until 8 October 2011, when the figure was pulled on a carriage by six black Friesian horses through Odense and thrown into Odense Harbor - accompanied by artist Jens Galschiøt dressed as an undertaker, a trombone orchestra, and 4-5000 black-clad funeral guests.

Hans Christian Andersen was resurrected and pulled up from the harbour for his birthday on April 2. However, he was somewhat affected by frost and water, so he was repaired before he went on tour around Denmark.

On 16 July 2013, the tour was over, and Andersen was bought by the then owner of H. C. Andersen Golf in Bogense, Finn Gramvad, who got him to the golf course in Bogense. In August 2022, the sculpture moved to the old harbour in Bogense in front of the cultural center Støberiet, and isn't he happy about that? He certainly seems to enjoy life near the sea - and thus the story has a happy ending after all.

In fact, the real Hans Christian Andersen himself stood here at the harbour in Bogense, when it was the only harbour in Bogense. On 16 July 1853, he traveled by steamship from Horsens to Bogense and then to Odense, and, just like the current sculpture, he was able to see the old customs building and the road up to the church. Perhaps he thought about his grandmother Anne Sørensdatter, who lived in the poorhouse in Bogense from 1804 until her death in 1825. The poorhouse was located in a couple of the small houses by Torvet close to the church.

Hans Christian Andersen's first fairy tale published in 1830 “Dødningen, et Fynsk Folke-Eventyr”, (the skellington, a Funish folk tale) actually begins “About a mile from Bogense in the vicinity of Elvedgaard”, so perhaps he got story ideas from his grandmother or mother?

There is not much horror about the sculpture, but you can certainly tell stories yourself, and you can sit at benches and tables close to Andersen and get some inspiration from him.