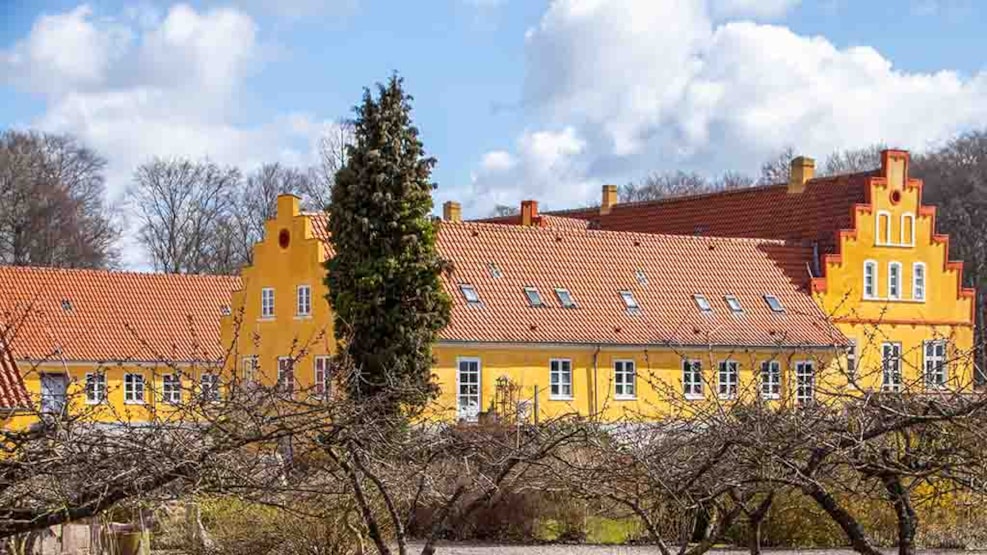 The beautiful yellow manor house just outside Veflinge is Elvedgård, which has been known since the 15th century - the current building is from the 18th century.

Elvedgård near Veflinge was first mentioned in 1436. Back then the owner was the esquire Hartvig Hesten.

In 1475 another owner, Frederik Barsebek, had a papal letter allowing him to transform the courtyard into a monastery for the Carthusian Order. However this never happened.

Over time, many claimed the right to the manor house, but in 1555, after much dispute, the farm surpassed to the brothers Jørgen og Otte Brahe, who were both rich and important men. Otte Brahe was the father of the world-famous Danish astronomer Tycho Brahe. However, it was his second son, Axel Brahe, who later on became an influential person in the Danish government, who inherited the manor house in 1571.

After the death of Axel Brahe his daughter Anne Brahe took over, but she had to pawn Elvedgård which would then have several owners through the years.

1721 the new owner Ulrik Frederik Brüggemann built a new one floored three-winged main building with tile roof. The main building, placed on an old mound, probably built by the previous owner Axel Brahe in 1590, also had an attic and foundation wall, while the side wings were half-timbered.

A historian and a fairy tale

Claus Hansen Wedel inherited the manor house in 1746, and for the next 200 years until 1969 it was owned by the Vedel family. In 1832, he left the building to his son, the famous historian Lauritz Schebye Vedel Simonsen, who lived here until his death in 1858. He was strongly attached to Elvedgård and donated money for a new school and a parish library in Veflinge. He published many books on Denmark's history and was one of the first to divide prehistory into the Stone, Copper (Bronze) and Iron Ages. He had an unhappy private life as he divorced his wife, who cheated on him, and lost his son, who committed suicide at a very young age. But he was happy at Elvedgård and loved working in the large garden and dreaming in the beautiful nature.

In 1800 the then owner, Claus Vedel Simonsen, took down the top floor of the towers and connected the rest of the towers to the side wings.

In the 1860's the then owner, Julius Christian Frederik Wedel-Heinen, tore down the old wings, built new ones and rebuilt parts of the castle.

The farm buildings of Elvedgård burned down in 1915, and a new three-winged building with white plastered foundation wall and red tiled roof was errected northeast of the main building.

The main building of Elvedgård is still surrounded by three moats. On the other side there is an old Romantic garden, which is criss-crossed by canals.

Hans Christian Andersen visited Elvedgård and Vedel-Simonsen in 1829 when he was looking for historical information for a book he was writing. Sadly the book was never published. Andersen's fairy tale "Døedningen, et Fyensk Folke-Eventyr" (“The dead man, a fairy tale”) (1830), however, takes place close to this area, as you can read in the introduction: “About a mile from Bogense, you find on the field near Elvedgaard, a white hawthorn remarkable for its size, which can be seen from the coast of Jutland.”

Elvedgård or Elvedgaard is still worth an adventure - it is a beautiful building that can be seen from the road.