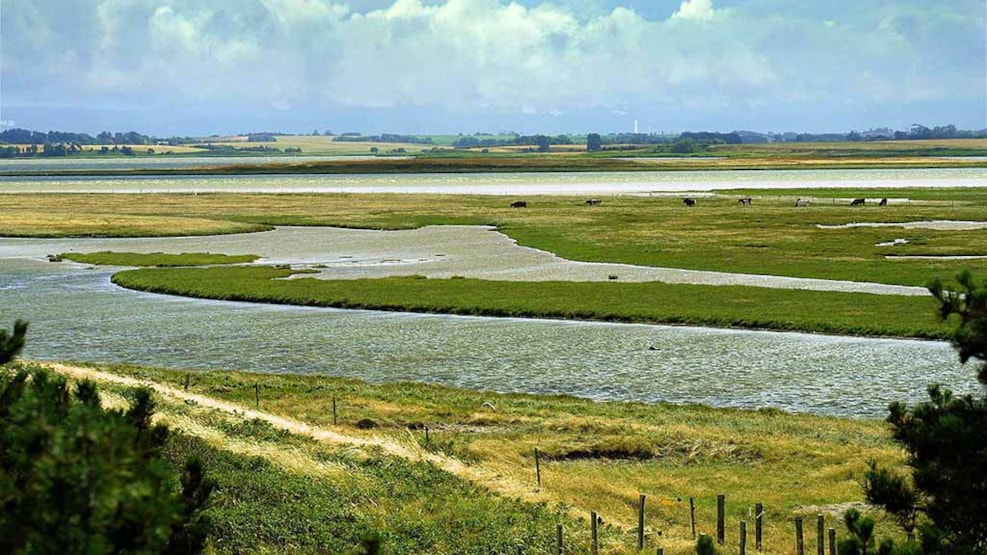 Nørreby Hals is the small isthmus that shields Nærå Strand from the waves of the Kattegat. Here you can enjoy a fantastic view of both Æbelø, Kattegat and Flyvesandet, and you can see the beautiful beach meadows and bird life on a lovely walk on the path along the sea.

Between the sky and the sea

Nørreby Hals is an isthmus that separates the Kattegat and the small body of water Nærå Strand. The small peninsula is created by the sea from gravel and sand, while the land has slowly risen. The sea around consists of wide sandy surfaces, and at the easternmost point there is a beautiful view of a jigsaw puzzle of beach ridges and lagoons.

You can see the area from the path that goes along the Hals. It's a nice walk. All you need to do is drive up Halsvej and park at the car park located just after the address Halsvej 49. There is a P sign at the car park. From here there are about 1.5 kilometers on foot along the path to the eastern tip of Nørreby Hals.

⇒ You can see more about the Nørreby Hals path and get a map of the path here!

Nørreby Hals was designated a protected area in 1979, and there are a myriad of beautiful plants and wild flowers in the wet salt marshes and the drier high-lying areas. Here grows beach wormwood, road mustard, buttercup and hemlock. The area is an eldorado for ducks and waders, and you can see many swans and geese and birds such as grouse, heifers, small copper snapper, great bustard, shorebird and northern lapwing.

In early spring and early autumn, there are good opportunities to see large flocks of herons during their migration to and from the breeding grounds in the North. In the winter, there are large flocks of ducks. And during the summer, you can meet the Galloway cattle that eat the grass and thus provide nature care to the area so the rarer plants in the meadows can grow up.

The polder and the old windmill

The innermost part of Nørreby Hals towards Nærå Strand was reclaimed in 1875. At that time it was a shallow cove, but two local farmers decided to build dikes in the area to get more agricultural land. It cost both money and labor, but in return the area would be exempt from property taxes for 20 years in the area that was reclaimed. Unfortunately, it turned out to be a difficult area to reclaim, and the dams were often breached. When the county governor, after 20 years, demanded tax payment for the area, it turned out that the fat agricultural land that should have been there was instead a swampy area where there was just land for a few cows to grass.

In 1918, a wind engine was built to pump the water out of the eight-hectare polder, but it never worked optimally. And in 1921 and 1954, the embankment was flooded during storm surges. Today, the area is partially dewatered using an electric pump in the dam. One can still see the old windmill that remains as an architectural monument.

Nørreby Hals is a protected area, and therefore you should only walk on the path and along the beach itself. Be careful where you go, as there is a lot of water in the meadows.