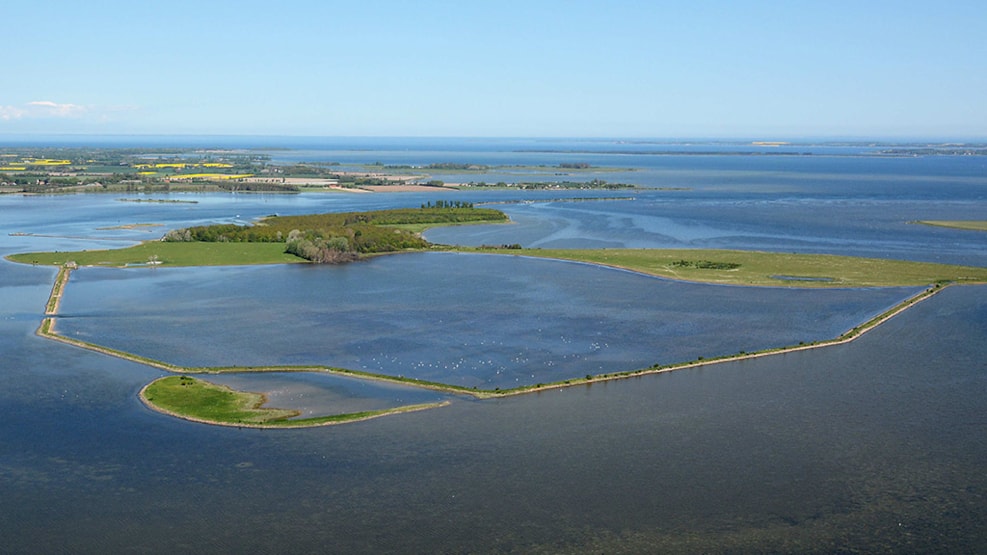 The largest island in Odense Fjord is located right next to Klintebjerg and is a beautiful sight, and you are very welcome to visit the island, which today is a nature reserve with good trails and a rich bird life!

Vigelsø is at 132 acres the largest island in Odense Fjord. The island was originally much smaller at only 66 acres, but in 1873, they built dikes through a large shallow area to the two islands of Store and Lille Ægholm, and by dewatering the reclaimed area, the island doubled in size.

You are very welcome to visit Vigelsø, and there is a 2.5 km long hiking trail in the woods. The southern part of the island is not accessible to the public to protect bird life, but you can see the birds from a bird watching tower.

There is a nature campsite on Vigelsø, and there is a ferry connection between Vigelsø and Klintebjerg.

There are large flocks of birds on Vigelsø, and you can see avocets, swans, geese, ducks. gulls, terns, plovers, spotted redshank, sea eagles and the peregrine falcon.

Vigelsø also has a lot of of deer, hare and pheasants, and you can see cattle grazing the salt marshes.

Vigelsø was already inhabited in the Stone Age, and it also had great significance for sailing traffic to Odense. Before the canal from Odense to the fjord was deepened in 1903, all goods to Odense were transhipped on barges at Vigelsø.

The island was also used for grazing and agriculture. In 1793, a half-timbered house was built on the island, and this building still exists and is now used as a nature school.

Vigelsø has always been rich in game and large bird colonies. In the 1930s, seagull eggs - up to 30,000 in one season - were collected and exported, mostly to England.

From 1969 it was over with livestock farming, and in 1974 the last manager with permanent residence on the island left. Since then, Vigelsø has been uninhabited.

In 1990, the Ministry of the Environment bought the island, and agricultural operations were discontinued in 1997. Today, Vigelsø is a nature reserve, and a major nature restoration has been carried out.

The island is mentioned for the first time in King Valdemar's Land Registry from 1231 under the name Wigelsø - perhaps named after a man named Wighisl. In the 19th century, the island's written name was Vikkelsö. And now it is Vigelsø - pronounced Wigckelsœu.