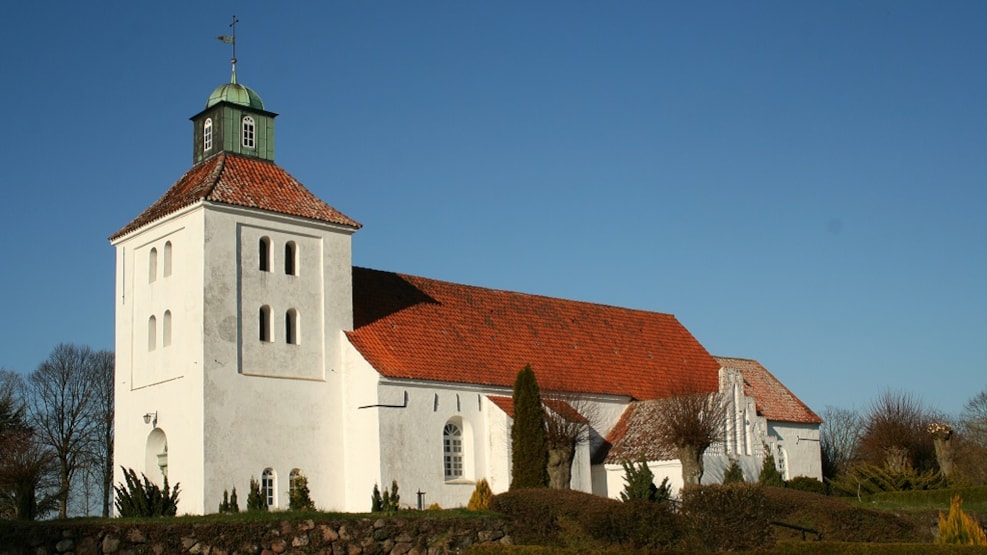 Krogsbølle Church is the only church left of the 5 churches that stood in the area - and it is still a beautiful sight.

Krogsbølle Church on North Funen was built around the 13th century.

The church is built of hewn granite blocks in Romanesque style. The church was originally consecrated to Saint Nicholas, the guardian angel of the sailors, perhaps because in the past it was close to the water. At that time it was located by Krogsbølle Fjord as a landmark. The area has since been reclaimed.

When five churches became one

In the 13th century, the church was called Hundstrup Church and was probably built after a wooden church and the village of the same name burned down. The parish was also called Hundstrup, and at that time there were three churches in the parish, namely in Kørup, Hundstrup and Agernæs.

The village church in Kørup was built in the Middle Ages and closed in 1555.

Agernæs Church was built in the Middle Ages and was a parish church until 1601, when the lords of Kørup were allowed to close it down and use parts of it for a church that was located by their manor house Kørup. The landowner also applied to the king for permission to close Hundstrup Church, but was refused. The new church was consecrated to the Trinity, but only existed for 200 years because it was difficult to reach for all the ordinary parishioners and the priest himself who lived in Agernæs. It also had problems in the construction that gradually became worse.

In 1781, the parishes of Kørup and Hundstrup were united with one church and with a new name - Krogsbølle. Krogsbølle is a place name that has been in the area for many years, after Krogs bolæ - Krog's residence, probably a large farm in the area.

The remains of Agernæs Church were used for some time for hospital before it was closed, and there was also house of prayer for a while there. There is very little left of all the disused churches, but in Agernæs you can see remains of the boulder wall around the cemetery, and there are some remains of the foundation for the Trinity Church at the Kørup manor.

Krogsbølle Church was under the barony of Einsidelsborg until 1928, and in the cemetery there are tombstones of previous owners of the manor Einsidelsborg - today Egebjerggaard.

In 1840, Krogsbølle Church underwent a thorough renovation, where the old tower was demolished to roof height and a new tower was built.