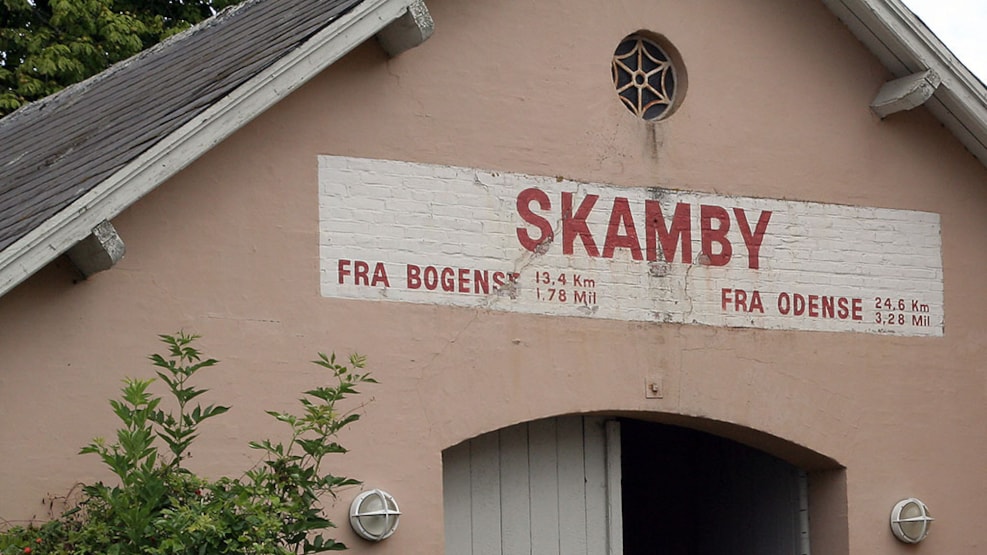 Giants, trolls and Vikings have helped to found Skamby - and the village has also been a station on the North Funen railway!

Skamby is an old town. People have lived there for millenia, and they have left traces. Near Skamby you can find both a giant passage grave from the Neolithic age, the huge burial mound Torshøj, which is probably from the Bronze Age and the Glavendrup grove with remains of 2 bronze age mounds and not least the Glavendrup stone with Denmark's longest rune inscription.

Skamby is mentioned in the written sources for the first time in 1348. There is a little uncertainty about where the name Skamby comes from. Maybe it means the short town or the town by the short river.

When Christianity came to North Funen, the first church in the region was built in Skamby. Reportedly much against the local troll Fin’s opinion.

The church is built of granite squares and monk stones, and there are many interesting things. Among other things, a "plague hawthorn" in the cemetery. In the Middle Ages, it was common to plant a hawthorn on top of the mass graves for people who died of the Bubonic Plague.

The railway Nordfynske Jernbane from Odense to Bogense came in 1882. The village grew around the station, shops and artisans settled down, and it was easy for the surrounding farmers to get their crops transported on the trains. In 1966, however, it ended when the railway was closed.

The church tower has competition from the large silos at Danish Agro, which has their regional headquarters in Skamby.

In the former train station, which, like the other station buildings on the stretch, is designed by architect N.P.C. Holsøe, there are homes. In the old hotel, the artist Knud Axelsen has his Gallery Nordfyn. The former coachbuilder is now a large, international furniture company with the coach as a logo.

Skamby is an active community, which a few years ago, in cooperation with Nordfyns Municipality, transformed the former school into a multi purpose-house.