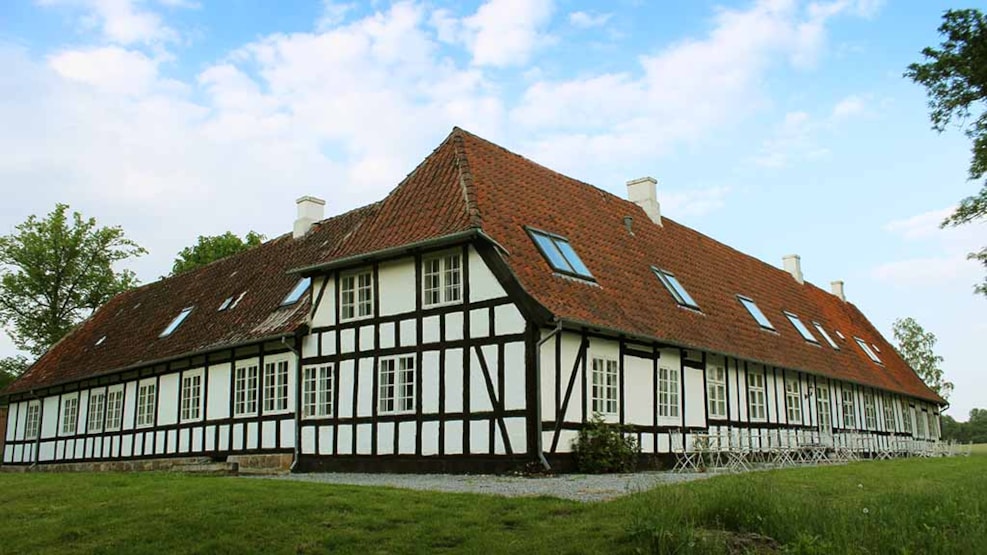 Jerstrup manor is beautifully situated by forest, lake and the long stream Kragelund Møllebæk, and the pretty half-timbered building is worth a little detour just for the view.

Jerstrup is a beautiful small half-timbered farm with a deep moat and a medieval granite bridge over the moat. Jerstrup is first mentioned in 1328 under the name Jærpælstorp. In the 16th century, the manor was owned by Jørgen Henningsen Qvitzow, who also held the North Funen manor Rugård as mortgage for the Crown. His family owned the manor until 1647, and the place had many changing owners, until Constance Frederikke Henriette Bernstorff of the Gyldensteen estate bought the manor and incorporated it into the county of Gyldensteen. Gyldensteen Gods still owns the breeding farm and most of the land.

The manor building itself now belongs to Harridslevgaard Castle.

The current building dates from 1719 and is a three-length half-timbered structure. In 1944 and again in 1952-53, the building underwent an extensive renovation by architect H. G. Skovgaard. The building was also thoroughly restored in 2007-09.

Today, the manor house has conference and function rooms and accommodation options. There are 18 double rooms and 5 large living rooms.

Jerstrup can be seen from the road.