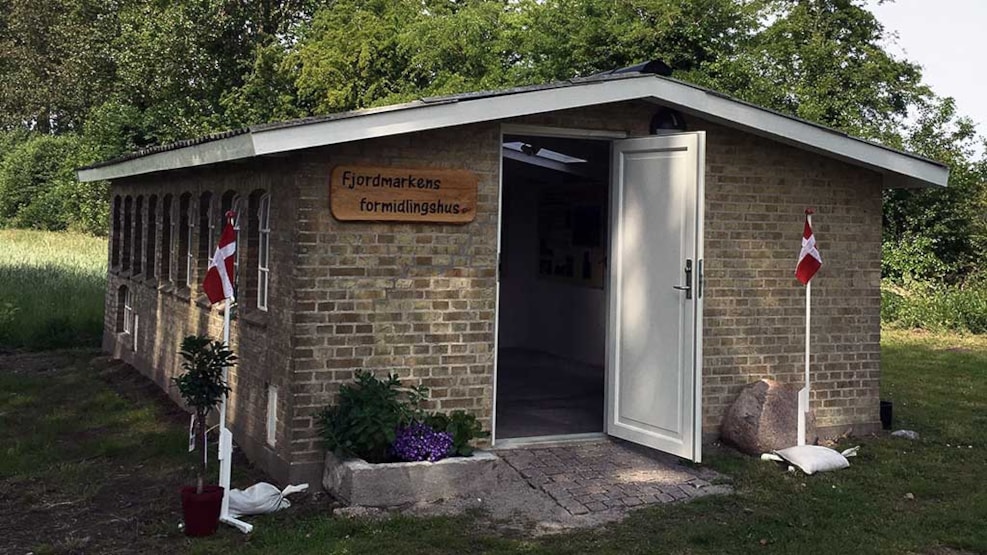 The exhibition in the house tells of the hard work done by multiple generations to dam in the sea and transform it into farmland.

In the year 1818, landowner Elias J. Møller from the Østrupgaard manor began damming the Egense Fjord. Work on the dams followed the Dutch model, using day labourers with buckets and shovels. Two dams were built out to the little island of Bogø, and water was kept out through the use of high water sluices. Posts, wattles, soil and stone were used to build the dams.

The land behind the dams was not entirely dried out, but could be used for grazing and growing hay. In total, the recovered land was equivalent to 85 football fields, but it was unprofitable when compared with the immense investments that had been put into the damming efforts. At the deepest section of the area, a large lake formed. During the damming work, 3 islands became landlocked, and the first inhabitants settled down in the area. At the time, the damming efforts were the largest in Denmark, and Crown Prince and Governor of Fyn, Crown Prince Christian, visited the site 3 times to keep up with the work. Two monuments were raised on two different hills (these are just outside the exhibition building). One tells of the Crown Prince's visit, the other of Elias J. Møller's business, for which he received the Danish Agricultural Society’s gold medal.

More than 50 years would pass, before a successor and namesake of Elias Møller would begin to improve the dam projects. New technology helped him out. Now, deep drainage canals were dug, in addition to a networked system of trenches. In 1873, a large Dutch windmill was erected behind the dams. It featured an Archimedes Snail that tossed the water into the ocean. This mill could pump away 1800 litres of water per minute.  The land became very dry, and in the periphery, grains and other crops could now be grown. However, grazing and hay growing continued to be of great importance. One area remained wet, however.  A mill watchman was assigned to the mill, and many more inhabitants later came to populate the area. Slowly, the profits Elias J. Møller had hoped for began to trickle in.

In 1913, Holger Møller, who now owned the land, wanted to sell the dam. The local population was worried that the area would end up in the hands of a consortium, and it was for this reason that they contacted the “Land development association”, a national organisation that would purchase land to divide it among smaller farmers. These days, the Danish government works to divide land to smallholders and day labourers.

The dam was purchased, I/S “Fjordmarken” (the Fjord field) was established and distributed 178 plots of land. The partnership firm had a board of 9 members. Some plots were sold to existing farms, while others were sold to new ones. An entirely new little society sprouted up in the area, and properties were built that could feed a whole family.

The capacity of the mill was improved several times, most recently after World War 2, when they installed a diesel engine to operate the pump facility. I/S Fjordmarken later wanted the entire dammed area to be reclaimed, and as technology now allowed this to be possible, an all-new pump station was built in cooperation with Hedeselskabet in 1965.

In the 1930s, a vast trove of oyster shells was discovered behind the dam, and these shells began to be harvested. The shells were in part used to produce porcelain and earthenware, even being sent to England, and as a supplement to chicken feed. This became a profitable business for Fjordmarken I/S, and the places where the shells were found became deep pits.

In the final decades of the 1900s, views changed regarding drainage and damming, and in 1996, Fyn County purchased 62.2 hectares of “Fjordmarken”. The pump capacity was reduced, so that water returned to the deep areas, forming new lakes in the old shell pits. Around this time, the reed beds and fens grew back, supporting rich bird life. You can find oyster shells behind the new pump station.

Elias J. Møller was born in 1761 in Diernæs at South Funen. He was the son of a poor smallholder, and nothing suggested he would be a landowner. But Elias had other plans. He became a servant at the Holstenshus manor, where he followed the young landowner's son on his travels and to educational institutions, both in Denmark and overseas. Elias had a good head on his shoulders, and taught himself both foreign languages and economical skills. A few years later, he was managing Østrupgaard and later Vejlegård, another manor on Funen. In 1795, he returned to Østrupgaard, and in 1797, he married the widow of its former owner, Anna Elisabeth Ramus, making him the landowner. But Elias Jørgensen Møller didn't rest on his laurels, instead becoming one of Østrupgaard's most dynamic owners. He expanded the property to include the nearby estate of Ørritslevgaard, where his brother became a tenant.

His family held Østrupgaard until 1924.  One of the more notable figures was Holger Møller, the owner from 1895-1917. Holger Møller got a scientific education, which he used to improve the plant harvest at his estate. Aside from that, he was also a conservatory-educated violinist, and he would hold concerts every year at Østrupgaard, inviting figures such as the young Funish resident Carl Nielsen, who would later go on to be a world-famous composer.

The exhibition house here is a former chicken coop. The plaques are made by local residents and Odense By Museums, and the project is supported by the municipality of North Funen.